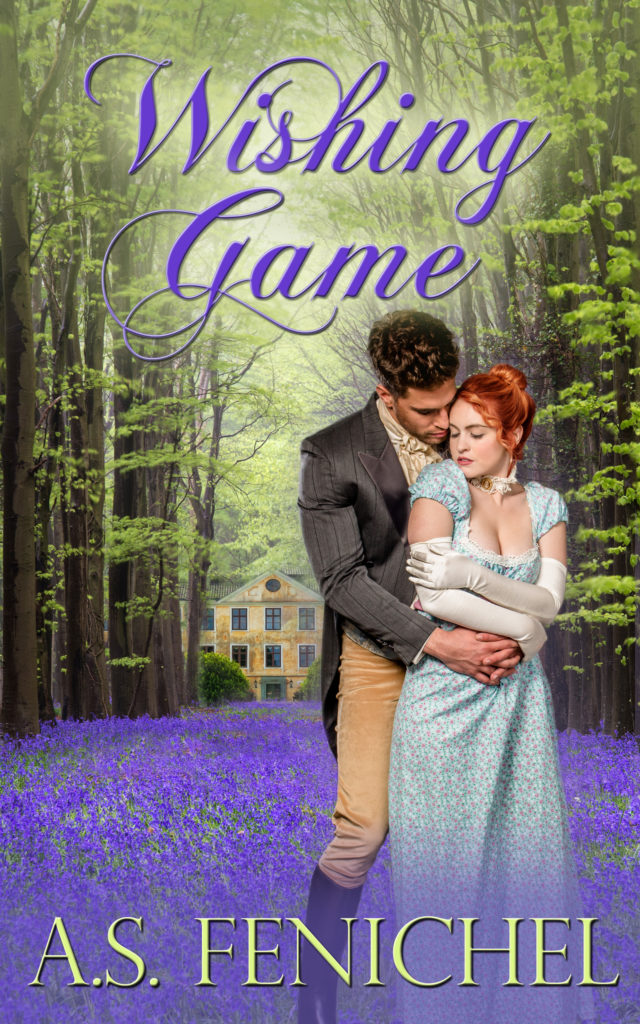 The Earl of Westbridge is dying, and without a male heir. His daughter Mary will lose her home if she does not marry before her father passes. She has already turned down two men while holding onto the hope of finding true love. In her desperation, she plays the wishing game, a childhood folly devised to chase away fear during thunderstorms.

Avery is the unwilling heir to the Westbridge earldom. He arrives a few days before the spring holiday in the middle of a horrific storm to offer his assistance to his distant cousin. Expecting a spinster who had been put on the shelf, he certainly never expected to develop feelings for the beautiful Mary Barrow.

Mistrust and doubt engulf them. It will take a miracle to bring them together. Or maybe just a wish come true.

It would be easier to hate Avery Townsend, if he weren’t so damned nice. And why did he have to have those arresting, amber eyes? They reminded her of a painting she’d seen of a lion. She couldn’t tell if he was about to devour her or cuddle her as if she was one of the barn cats.

Why was he encouraging her to marry? If she had a husband, he would have no inheritance. “My cousin would marry me if I wished it. He and I are very close, more like brother and sister.”

He made a sour face. “I suppose it is not a very appealing prospect to marry a man you think of as a brother.”

“No. However, if I were smart I would do it anyway.”

He frowned. Could it be he really was worried he would lose the lands and house? The tea arrived and she did not ask the incredibly forward question. Once the maid had left the parlor, Mary poured the tea.

“You could stay here, cousin.”

Her heart thumped wildly. “What, in this house, after my father is gone and you are the owner?”

His strange eyes lifted and his gaze settled on hers. She had no idea what the man was thinking. “Exactly as you are now, if you choose. I shall not put you out of your home.”

“And where will you be, cousin?” She used the familiarity he requested but bit out the word so there was no doubt of her distaste.

He stood up and moved toward the window. The rain continued to pour down. “I shall not trouble you much more than to stop and check the accounts from time to time.”

Her entire body grew hot with rage. Her voice rose in both volume and pitch. “Am I to be your mistress? Do you think me so desperate?”

His neck grew red. When he spoke there was no doubt, she had angered him.

“You misunderstand me, madam.”

She stood up and carefully placed her tea on the table. “Do I? How will it be proper in any way for me to live in this house after you take possession? It’s already scandalous that you are here before my aunt arrives.”

“It is your house.” His voice rose over hers.

She took a step forward, refusing to be intimidated by any man. “No, sir. That is where you are wrong. When my father dies, you have the happy luck to be the heir to Heartshorn. If I stayed, the neighborhood would be aghast.” She took a deep breath. “I hope you will keep the staff on. I would hate to see them out of work after serving the Earl of Westbridge most of their lives.”

He crossed to her and stood towering over her with only inches separating them. His eyes flashed with danger, but she held her ground. Her heart raced and fear rushed to every nerve. Had she gone too far? She must learn to control her temper and stay her wicked mouth.

She thought he might strike her, but his hand came up and touched her cheek with a gentleness she wouldn’t have equated with the man or the situation. She watched his Adam’s apple bounce several times. His mouth opened and closed and his eyes flicked from her mouth to her eyes.

Mary could not have moved if the roof had caved in on her. She was in a trance.

He closed his eyes for a brief moment and when they opened, she could see his temper was quelled. “Forgive me, cousin.”