Another week, another Blog Hop from Romance Writers Weekly. I love it!

This week it was my turn – A.S. Fenichel asks: Choose one of your books and tell us where the idea came from. Was it a dream, an overheard conversation, did it spark from a previous book you wrote? How did the idea come to you and how did it evolve into a full story. If you want to share a snippet, that would be awesome too.

Here we go! Ideas for books come to me in many ways. Once I was sitting listening to a bunch of authors talk about their books during a conference panel and all of the sudden I had this great idea for a new series. It didn’t have anything to do with what they were saying, but somehow they inspired my imagination to pump out a great idea.

I wrote a lot of books before I was published and those books will stay tucked away in my closet and databanks bringing fond memories but never seeing the light of day. Today I want to tell you about my very first published book MAYAN AFTERGLOW. The idea came to me in a dream about a court jester sealing the silver from the castle dining room. In the dream a maiden was being tortured by a wizard and the jester had to choose between saving the girl or his bounty.
–
What does that have to do with Mayan Afterglow. Not much, but that’s where the idea started. A weird little dream just before I woke up. The next day I saw a call from a publisher looking for novella length stories about the End of Days. Now this is where it gets “weird writer”. Somehow my brain took the court jester and turned him into a hot thief robbing homes deserted after End of Days. The maiden was still a maiden, but she was captured by the Lord of the Dead and held in his world.
–
Here’s how that scene turned out:

Ian had already taken what he could find in the bedroom. A small safe tucked into the master 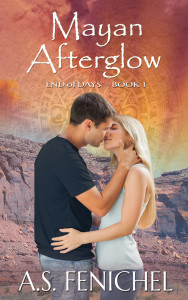 closet had been a challenge but well worth his time. The tumblers had been no match for his explosives, and the trading power of the diamonds and rubies he’d found would keep him eating and moving for months. He’d even sell the costume stuff to a less-discerning customer.

Messenger bag slung across his shoulder and flashlight trained in front of him, he headed for the kitchen. The canned goods would still be safe even though the house was abandoned since the infamous events of December 21, 2012 ten months earlier. He pulled the scarf around his neck up over his mouth and nose as he entered the enormous kitchen. The smell of rotting food penetrated the wool, but he was used to it. He walked past granite countertops and across the marble floor to a door on the far left. In the walk-in pantry, he tucked beans, tuna and beef stew into his bag. A sharp pain at the back of his head snapped him to attention. He turned sharply but no one was behind him. The pain dug into the base of his skull.

An instant later, he heard static popping from the next room. He knew he should take his bounty and leave the house. His instincts told him to run as fast and as far away from Lake George, New York as he could. He passed through the arched doorway. In his mind he screamed, “Ian, run!” but his legs carried him toward the sound in the next room.

Completely dark except for the shaft created by his flashlight, the ornate room had two crystal chandeliers hanging over a table that probably seated twenty people at one time. Ian had a fleeting thought about those people and their fate before pointing his light toward the far wall. A fireplace covered in white marble took up most of the wall. Above the mantle a portrait depicted a very happy looking family. A middle-aged, blonde woman sat in a wingback chair with a dark-haired man behind her. Three blonde girls in their teens surrounded her, all blue-eyed and all smiling like they lived in a perfect world. Maybe they had.

The pain returned and Ian grabbed the back of his head. He turned off the flashlight. As he did so, a light streaked and popped like electricity at the other end of the room. Ian advanced toward the fireplace. Could the house have an open circuit of electricity? Was that even possible? No. The only electricity was what he generated himself with wind, water or fuel. All of these homes were as dead as the people who had once dwelled in them.

The crackle of energy filled the air with the smell of smoke and burning hair.

He tucked his scarf back up over his nose.

The light grew brighter and in the center he could make out two figures embracing.

Then they were gone.

He was in darkness.

Several minutes elapsed. He didn’t move or turn his flashlight back on. He knew he was alone, but he couldn’t deny that he had seen two people in the burst of lightning that had flooded the room. A man and a woman, he was sure of it.

His first thought was that they appeared so clean. The few people left alive on his journey struggled to survive. They’d been worn and dirty just like him, some much worse.

As well as being clean, the people in the burst of light wore bright new clothing. The man had been in dark trousers and a beige shirt that flowed around him. His hair was dark and his pale skin stretched tight around his bones. Ian had noticed this in an instant but it was the woman who had captured his attention. She was magnificent. Loose blonde curls flowed down her back and across her shoulders, and her blue eyes were the color the sky should be on a clear spring day. She had creamy skin that begged to be touched, and a body lithely wrapped in a long tunic of dove gray. He recognized her from the portrait. She was one of the teenagers, though she was several years older now.

He laughed. “You’ve lost your mind, Ian. That’s what this is. You’ve been without a woman for so long that you’re conjuring them out of the ether.”

The pain returned. He ignored it and waited.

The pop and crackle of electricity lit the room. His skin tingled and the hair on his arms stood on end.

The pair flashed into view again. Ian was closer this time. What at first had appeared to be an embrace now seemed more like an assault. The man was stealing her breath. Those heavenly blue eyes were round with fear. She stared out of the light and looked right through him.

Ian reached forward thrusting his arm into the lightning. Searing pain coursed through his hand and arm. Madness. This is pure madness.

He reached farther into the bolt and felt flesh beneath his fingers. Closing his hand around her arm, he yanked hard and fell backward onto the floor, the woman falling on top of him.

She rolled to one side.

The other figure in the light screamed with rage.

She held up her hand toward the enraged specter and muttered something.

Blindingly bright light filled the room for an instant before it all went dark.

There was silence save for his own breathing. She was dead or gone. Had he imagined her?

He flipped the switch on the flashlight still gripped in his right hand and pointed it toward the floor to his left.

She was there, crumpled next to him. Her touchable skin only inches away. He reached out and pushed the hair from her face. It was silk on his rough fingers.

Her eyes popped open and he jerked his fingers back like a child caught cheating in school.

There were several seconds before her eyes focused on him. It was like she was in a trance and for the first time, she was waking up.

When she spoke, her voice was soft and low, barely a whisper. “He’ll find another way through. You must run from this place.” Her head rolled to one side and her eyes closed.

Fear shot through him. “Shit. Don’t be dead! Shit.” He felt for a pulse at her throat. There it was. He sighed. “Not dead. Good.”

He picked her up, pulling her upright by both arms before hoisting her rear end over his shoulders like a fireman. She was small and thin and her pelvic bone pressed against his shoulder. Her weight was not much of a hindrance as he ran through the kitchen and foyer to the front door.

At the bottom of the steep front steps, he turned left down the horseshoe-shaped drive. He heard the growl before he saw anything. The bushes rustled. Ian lowered the woman to the ground without taking his eyes off the bushes. These things rarely traveled alone. Red eyes peered out of the darkness. There was no moon or stars but the sky glowed the same red it had for ten months. It was light enough to see the evil that lurked in the shrubbery.

He put himself between her limp body and the creature as it crept onto the driveway. Like a wolf but bigger and mangier, it was some kind of mutation. These horrible distortions of the world before were not common. How did this one end up in a residential area?

A second animal moved out of the bushes. They snapped at each other as if their proximity was a necessity rather than a choice. The two-inch canine teeth of the larger animal nicked the snout of the other who cowered and whimpered.

Ian took the opportunity to reach for the pistol tucked into his waist. He fired quickly at the larger animal.

It immediately rose on his back legs, roaring in pain.

Ian moved as far back as he could without leaving the woman exposed.

The creature collapsed forward but as it landed, its substantial front claw sliced open the side of Ian’s calf.

The smaller animal wasted no time and leaped toward Ian. Ian’s leg collapsed beneath him, but he fired. The shot was off by several inches and only grazed the wolf’s neck. The animal cried out and ran for the woods.

He reached down to help her stand. “We have to go. There could be more. They’ll come soon to scavenge that one’s body. They have no qualms about eating their own.”

She made a face as she took his hand. “We’ll have to bind that gash or you’ll be passing out too,” she said, looking at his leg.

That’s it for me this week. Hope you liked this little taste of my very first foray in to publishing.

Did you miss something? Go back and find out how S. C. Mitchell finds his 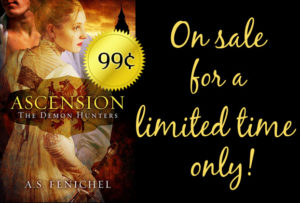